I was lucky enough to spend the most recent 4th of July weekend on Orcas Island with family (if you’ve never been – GO!).  An unexpected bonus was the fact that my cell phone didn’t get reception in the house we were renting, so I just turned it off – sweet freedom! So it came as a complete surprise when I turned my phone back on, after 4 lovely days, to see 96 email messages and a slew of text messages waiting for me… What on earth could be going on?

I quickly realized the majority of the messages were related to an article by Val Easton, CONTEMPORARY COOL that came out in the July 3rd, 2016 Sunday Seattle Times Pacific NW Magazine, featuring the backyard of one of my clients – Modern Shed owners Ryan and Ahna. 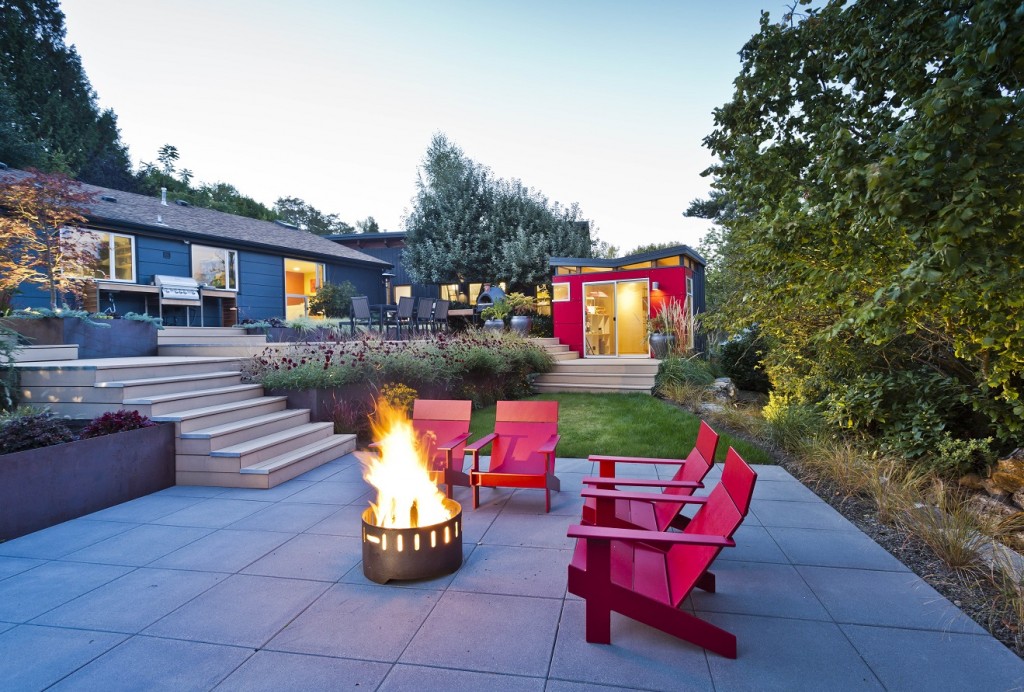 I had the INCREDIBLE good fortune of being introduced to them through a previous client, over a year ago.  They had just finished completely re-doing their back yard.  What was once a steady slope down from a concrete patio directly off their back door to the neighbor’s fence, was now a set of distinct spaces connected by a series of terraced decks, steel planters and two paver patios (an upper and lower). They were asking me to help them with the planting design.  You mean I get to put the icing on this gorgeous cake – of course! 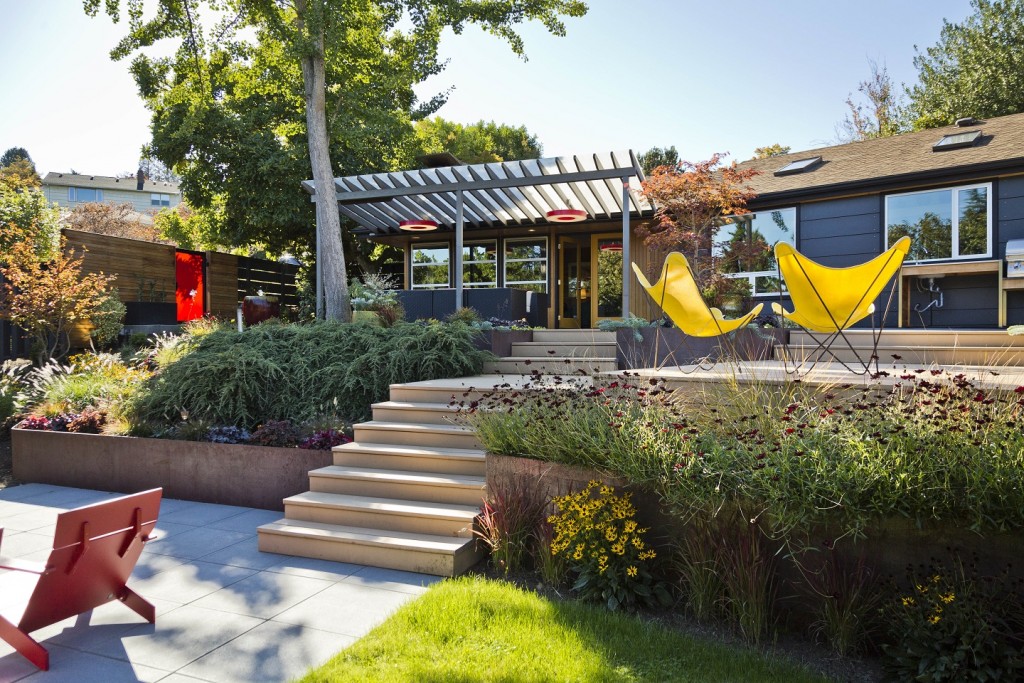 Over the next several months, we talked about colors, textures, light… Ahna and Ryan have a great sense of style and color, so the collaboration was pure joy.  We removed a massive old apple directly outside their kitchen window – allowing light to stream in to the kitchen, dining and living room spaces, and replaced it with a red-leafed Japanese maple (Acer palmatum ‘Sherwood Fire’). 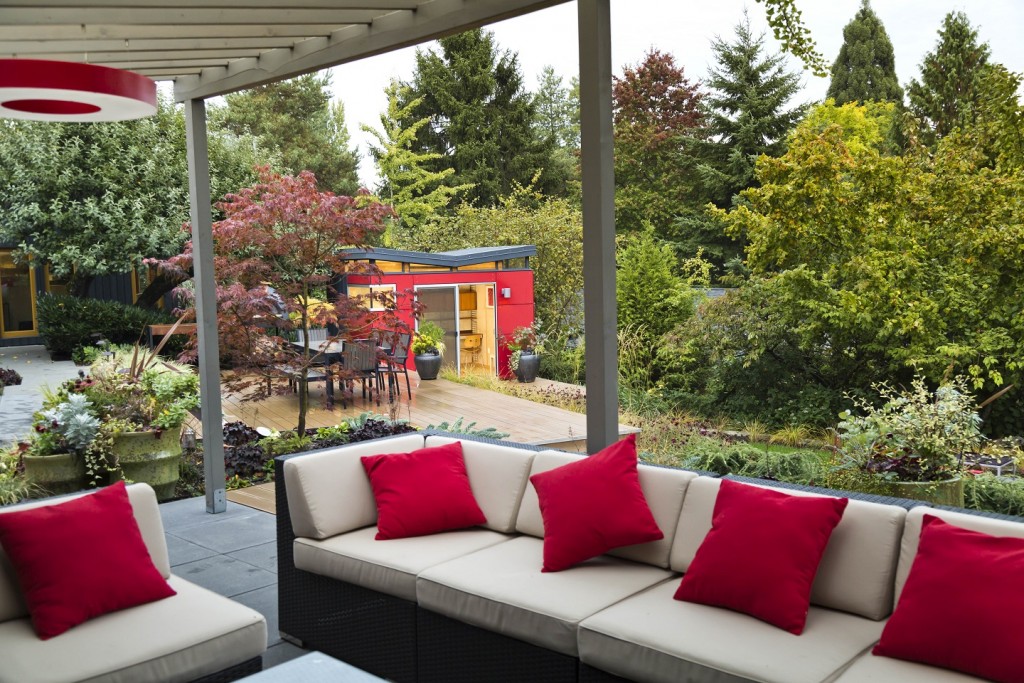 A bubbler fountain was added to the front entry space to provide screening and help separate the entry gate from the upper sitting area as well as the soothing sound of water.  A red translucent door, made from a Koda XT exterior polycarbonate panel by 3Form, was added to their new entry.  The red was chosen to echo the butterfly-roofed Modern Shed at the opposite end of the yard, the Loll chairs on the lower patio and the red doughnut lights from 3Form Light Art , illuminating the upper sitting area. 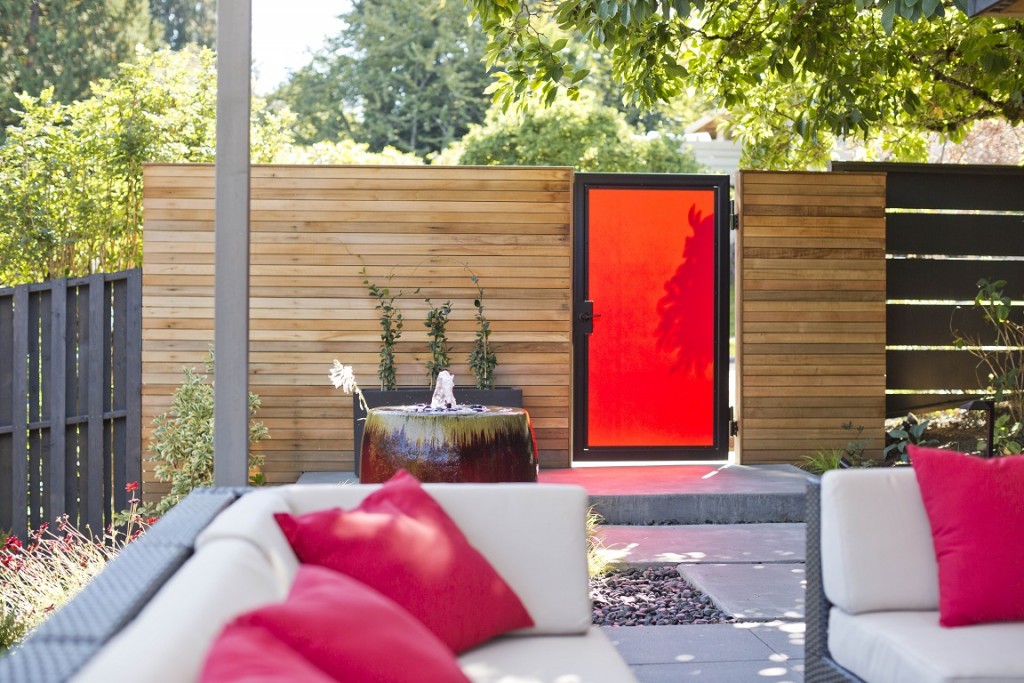 Lastly, I spruced up space with a series of containers. Plantings for the containers included evergreen selections such as a dwarf strawberry tree, Obsidian heuchera, sweet flag, and a dwarf mugo pine.  I chose Tiger Eyes sumac for its deeply cut lacy foliage and stunning fall color. 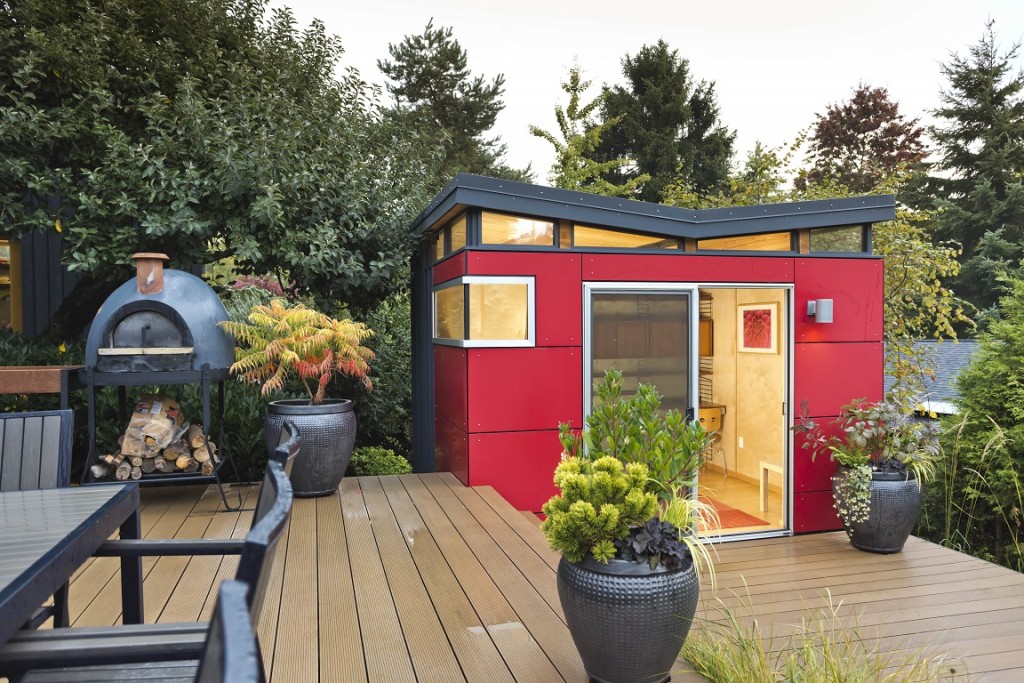 The plantings were all chosen for their texture, form and color first.  Ahna and Ryan’s contemporary aesthetic called for a paired-down plant palette that complimented the reds and golds already present in the structures and furniture.  I used grasses such a feather reed grass, Calamagrostis acutifolia ‘Karl Foerster’ for it’s upright architectural habit and pheasant reed grass, Anemanthele lessoniana for it’s movement and color.  I planted chocolate cosmos in front of the pheasant reed grass to pick up on the reds in the grass,  steel planters and shed.  Fountain grass, Pennisetum alopecuroides ‘Hameln’ was planted on the slope below a multi-stemmed Japanese stewartia,  stewartia pseudocamelia. 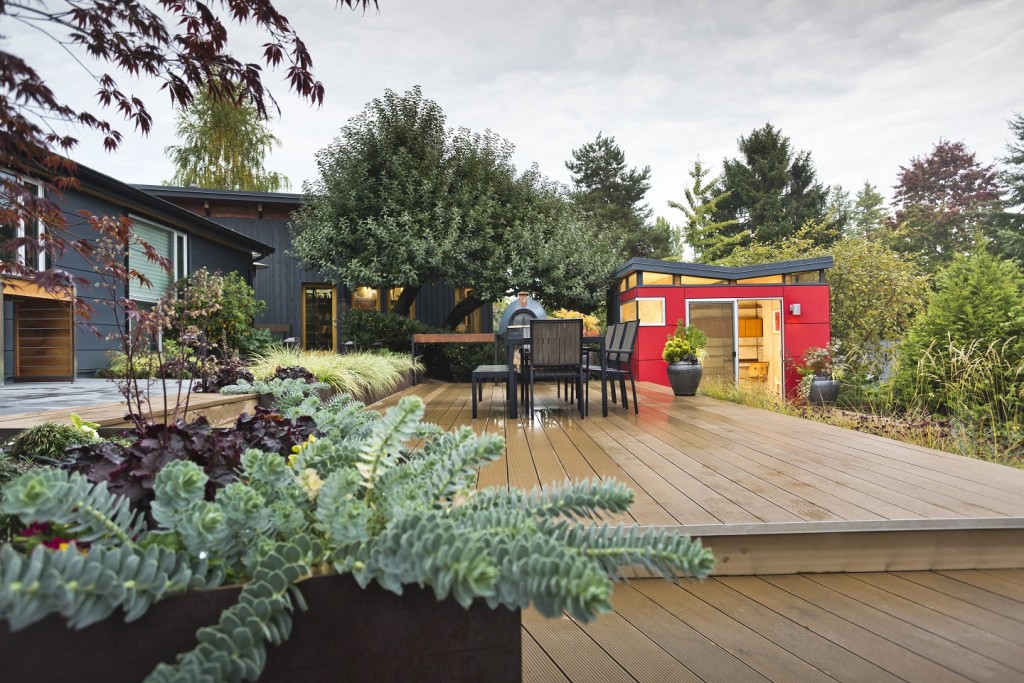 I can’t help but pinch myself when I look at these images.  Could a girl get any more lucky?  I think not.